Living in this age of antibiotic resistance, stubborn viral infections and Lyme’s disease, a person wonders what is next. Even in the world of natural medicine some of the treatments from 10 years ago are not as effective and require more medicine and repeated courses of therapy than in the past. 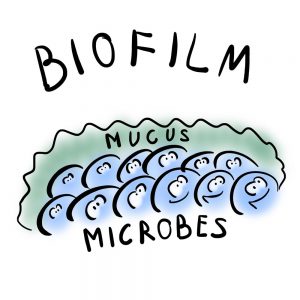 Two scientists that helped pave the way for treating difficult infections are Dr. Voll and Dr. Gunter Enderlin, both from Germany.  Dr. Voll came up with the concept of the focus or foci, meaning focal of hidden infection. These infections are often hidden such as in root canals and create a block to then nervous system and immune system. Dr. Enderlin studied live blood during his career and confirmed pleomorphism—the migration of pathogenic forms into more deadly forms if the biological terrain of the individual were acidic enough. This theory also leads to the concept of cell-wall deficient forms (bacteria etc. that are missing their cell walls, i.e. antibiotic resistance)

These theories of hidden infection have been refined and added to over the years and the newer addition is the concept of biofilms. A biofilm is a mineral wall formed from various bacteria and other microorganisms that join together surrounding themselves as a protective wall. This creates a barrier to the immune system and puts these infectious agents out of reach of potent therapies and medications. The above theories, along with the biofilm theory, explain much of the current bug resistance and how the correct medication has limited results and a return of infectious symptoms within a short amount of time.

This approach to treating resistance infections can be helpful, however it is not as simple as research might lead one to think.  EDTA is one agent that has been introduced into these microbial communities in a test tube and found to be 1000x’s stronger than certain antibiotics at killing these bugs. It works by binding the metals from the biofilm as EDTA does with heavy metals in chelation treatments. Clinically, my experience has been that oral EDTA used for this purpose is somewhat effective. It has been more effective when used to open biofilms allowing for concurrent treatments to penetrate more deeply, thus reaching the microbes. Often this must be repeated a number of times while paying attention to the die off reaction, also known as the herxheimers reaction.

What is important about it is it can make resistant infections more vulnerable to treatments.  I have used this technique clinically and think it is worth considering in chronic conditions that have had limited success with other approaches.

I hope this article has been informative.  Please call my office at 928-772-2600 for more information.