Chelation is a concept from ancient times meaning “crab claw”, and in modern chemistry relates to “ligand chemistry.” Ligands are, in this application, substances that bind up toxic metals with opposite charges and carry them out of the body. Chelation therapy means an experimental medical therapy to restore cellular homeostasis through the use of intravenous, metal-binding and bio-inorganic agents such as ethylene diamine tetraacetic acid (EDTA).  Some other examples of chelators are calcium EDTA, penicillamine, and sulfur complexing agents such as DMPS and DMSA(oral). The body also has its own sulfur based amino acid process via glutathione, and amino acids and mineral effects such as selenium. There are also other natural substances that can have a natural chelation-like effect such as chlorella and cilantro (both orally). 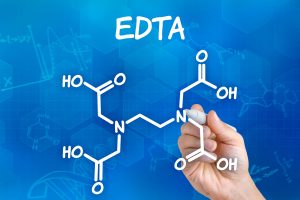 This site currently has information on EDTA, based off of Dr. Elmer Cranton, MD’s work in the book Bypassing Bypass. Chelation is only FDA approved for heavy metal removal and there are no other claims made on this website for this therapy. All information is for informative purposes only.

How does it work?

How do those metals get there?

What about binding of calcium?

What else can help chelation?